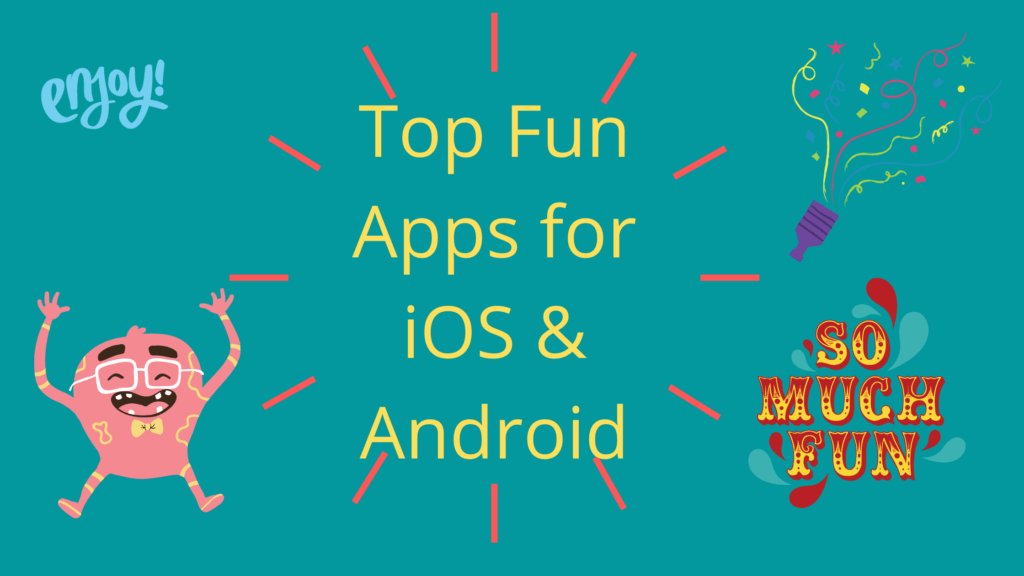 Once in a while, every one of us needs to blow off some steam. Being caught up in the mad frenzy of daily hustle is overwhelming and annoying.

Thankfully, we have these handy power packs, aka smartphones, to keep us sane. So no matter if you’re an Apple fan or an Android supporter, having the following fun apps is your best shot to kill boredom and stress.

Fun Apps for iOS and Android

When monotony takes the best of you, it’s better to join Alto and his friends as they set off on an endless sandboarding journey. Along the way, you will earn points, complete goals, and collect coins to upgrade your abilities. Developed by Snowman, this game is soothing and immersive with its latest mechanisms.

It doesn’t only serve up a fantastic succession to the original Alto’s Adventure. But also delivers a gaming experience relevant for all ages.

DryGin Studios brings a hilarious app, iFunFace that successfully garnered massive user attention. You can begin by choosing a photo from your existing album. Next, you have to identify the mouth other face parts for people/pets in the image. Go ahead and record whatever you want while using a voice filter. Voila! You can now share some laughs with people.

Indeed, a good pastime when the clock seems to move at snail speed!

9GAG is an image-commentary sharing site that’s super popular among gamers, cosplayers, and the young generation. The developer defines it by saying that 9GAG is your best source of happiness. Share the fun, get responses from people worldwide, and vote on what you laugh at.

The Hong-Kong based online platform and social media website, 9GAG was launched on July 1st, 2008. Apart from its easy-to-navigate categories and distinct layout, 9GAG is famous for its community and hilarious comments.

Candy Crush is one of the highly addicting games to hit the app stores. King released it on April 12th, 2012, for Facebook, and the other variations followed later. Players attempt to match three similar candy types to eliminate from the level and bring their replacement into the game. A combination of four or more candies creates unique power-ups with more extensive board-clearing abilities.

The distinct goals and moves on each board make this game different than other combination games. This is one reason why it got 2.7 billion downloads five years after its release, turning it into the highest-grossing games.

Developed by WET Solutions, My Virtual Boyfriend was a relatively new concept in the app stores. It is a male dating app where you can find or design your ideal. It is filled with fun and exciting elements as you learn what you are looking for in your real-world guy.

You have to use flirty ways to catch the attention of the virtual hottie and win his heart. There are more than 35 levels in this game. Plus, it is available in various other versions where you have a virtual girlfriend to win over.

Comedy Central is the perfect world if you want to switch off those spammy thoughts fuzzing your brain. You can watch the full episode of your favorite series after it has aired. You can also kick-back with classic shows, stand-up specials, full seasons of returning series, or short videos.

The Chromecast support lets you cast your favorite shows on TV when you hook up the device. The Comedy Central app becomes your remote when doing so.

Exercising those sleepy neurons is just what you need when you’re feeling down.

Pictoword is the game that gets it done creatively. It is a fun word game developed by Kooapps where the player has to guess words from the picture. The puzzles aren’t too complicated. However, when you get stuck, you can use your coins to get a hint.

The game features various levels of difficulty for different age groups. The concept behind this app makes it one of the best brain training games available in the digital marketplace.

Color Road comes with a simple yet unique concept. The player has to roll their ball to ones having the same color. The difficulty level ramps up as you move ahead, and the speed of the ball increases.

It is essential to check the security framework operating at the backend. In this case, a highly secure algorithm powers Color Road, following the airG scam-free app structure. So don’t fret about nasty bugs seeping into your OS when you install this game.

Apart from Instagram and Flickr, there is a new social photo-sharing app, Imgur. It is the ultimate go-to place to host viral photos of Twitter, Reddit, and other websites. The meme-centric app allows you to scroll past the most viral images on the Internet.

It offers a decent experience for people with an endless appetite for memes and sophomoric taste in humor.

Developed by Eureka Studios, MomentCam is quite a creative way to bust stress. You can even use it to create personalized gifts on your smart device.

Essentially, it introduces a “cartoon yourself” concept where you can create a funny photo of you and your friends. You can express your emotions using humorous images and even craft personalized emoticons.

Have you ever been hooked to Pictionary?

If yes, this app will surely stay on your phone for a long time. It comes with a concept where players have to guess the picture drawn on the screen.

On days when the whole team feels like they can’t function anymore, this game could give them a pat on their backs. It lifts the mood and allows all players to bond distinctly. There are free and paid versions of this app.

The site allows you to access serious as well as hilarious topics. It is a mix of attention-grabbing headlines, celebrity features, informative posts, and different ideas worldwide. You can select the type of content you want to view and have good laughs during tedious lunch hours at work.

Roposo allows you to watch and make fun videos on your phone. You can record video selfies with lenses, filters, 3D masks, and modify the way you look. Next, you can share them on desired social media platforms to show your pals.

This app brings awesome animations, video selfies, and masks so you can add them to an image and change the way you look. It gives an excellent outlet to let go of anxiety and monotony on an ordinary day.

SketchAR is a fantastic game to refine your drawing skills in a fun way. It gives you drawing art lessons and an AR tech app to learn how to draw using the new technology. It was initially designed for professional sketch artists to provide convenient tracing sketches on the desired surface.

Nonetheless, amateurs can also use this app to nurture their drawing skills. The app provides step-by-step lessons to learn drawing on your own.

Flappy Dunk is the modified version of Flappy Bird. It is a straightforward game where the player has to tap the screen to keep their ball in the air. You have to maneuver the ball through an endless series of hoops to keep it floating in the air and gain points.

The easy-going gameplay, combined with a unique interface, makes this app suitable for kids and adults alike.

To sum it up, there are plenty of games available in app stores. All you have to do is look carefully, filter your search, and find apps according to your taste. We hope you found something on our list and will be killing time the fun way, instead of whining or moping around.