Ionic vs Xamarin vs React Native: Which One to Choose for Mobile App Development 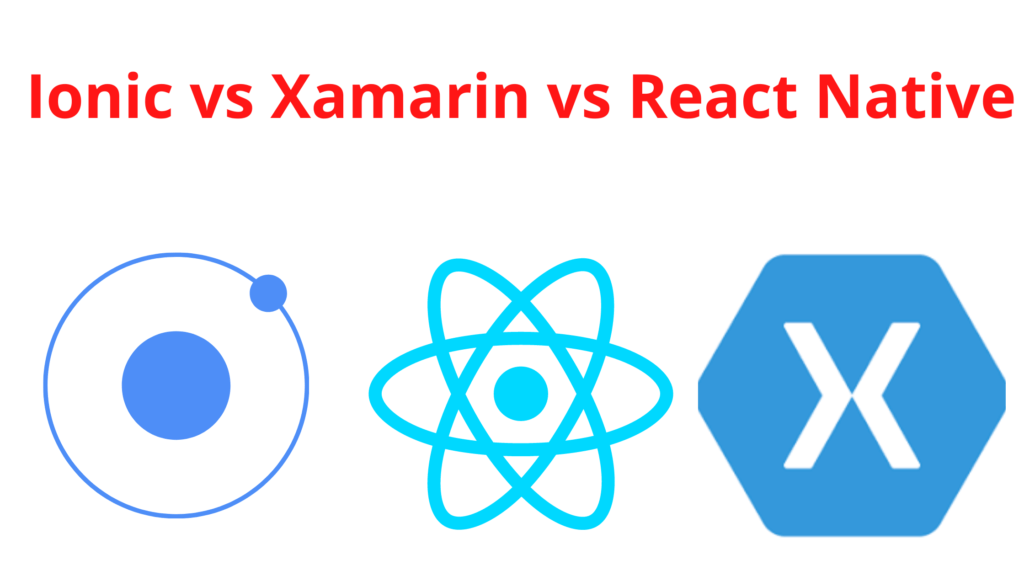 Thanks to some superb cross-platform development technologies, most small business, and startup app projects do not prefer native app development anymore. Building an app that runs on multiple platforms delivering an equally sophisticated and smooth user experience while reducing the development time and cost is an advantage that no businesses want to miss.

While the popularity of cross-platform development technologies is growing, it has become really difficult to compare the right one for an app project. You have several cross-platform libraries and frameworks when you hire app developers in India. Let’s make a comparison among the top 3 technologies, namely Ionic, Xamarin, and React Native.

What Is React Native?

React Native is a free and open-source cross-platform development library based on JavaScript and JSX. Developed and maintained by Facebook since 2015, React Native allows up to 85% reusability of the code across both iOS and Android platforms while maintaining a consistent native user experience.

● Extensive community support of React Native thanks to a buzzing global developer community is really helpful for any project.

● The hot Reloading feature of React Native allows correcting the codebase of the mobile app any time after instantly evaluating the effect in the live app.

● React Native allows developers to integrate and take the help of a whole array of third-party plugins.

● By utilizing the native modules and multitude of native components for both iOS and Android, React Native ensures delivering a functionally superb user experience.

● Many developers think that React Native as a library doesn’t offer framework-like clarity and mostly provides a bunch of components and templates.

● Developers using React Native should have a solid command over native development technologies just because they require to use often as much as 25% to 30% native code.

● React Native, in contrast to Flutter, requires a separate bridge to communicate with the OS-specific native layer. This can create some performance issues.

● React Native as a cross-platform library depends heavily on third-party APIs to deliver a variety of app features and functions.

Xamarin coming from the Microsoft family uses C# and .Net technologies for delivering a cross-platform framework to build Android, iOS, and Mac apps. While using Xamarin, developers can use various .Net libraries to use a multitude of native open-source libraries for both iOS and Android.

● Using a single technology stack and allowing sharing of the codebase helps in fast-paced development.

● Thanks to using one programming language or technology stack, Xamarin can stick to one environment without needing to switch between different development environments.

● Xamarin allows easier app maintenance as changes for multiple app versions need to be updated only once in the source file.

● Xamarin apps have a bigger footprint and consume several MBs of space.

● Xamarin is not recommended for app projects requiring rich graphics and animations.

● Xamarin app updates experience delays, and the iOS and Android releases consume several days to be available
for the system.

Read: React Native vs Xamarin: Which is Better?

Ionic is a robust cross-platform development framework that uses time-tested web technologies such as HTML5, CSS, and JS to build and run mobile apps across the web, iOS, and Android. The framework to utilize the native UI layers of iOS and Android use the Cordova wrapper.

● Ionic builds apps that are truly platform-independent and can run across all platforms while maintaining a native user experience to a great extent.

● Ionic uses a capacitor and a simple interface to ensure easy access to native SDK and native APIs for each platform.

● By using a single codebase written in familiar Javascript language and libraries reduces code rewriting to a minimum level.

● Ionic helps maintain a consistent performance irrespective of the number of active users.

● In spite of providing a whole array of plugins, Ionic may not provide the required one for all kinds of custom features.

● Ionic doesn’t provide the Hot Reloading feature, and this requires refreshing the whole app to see the effects of any changes made in the app code. 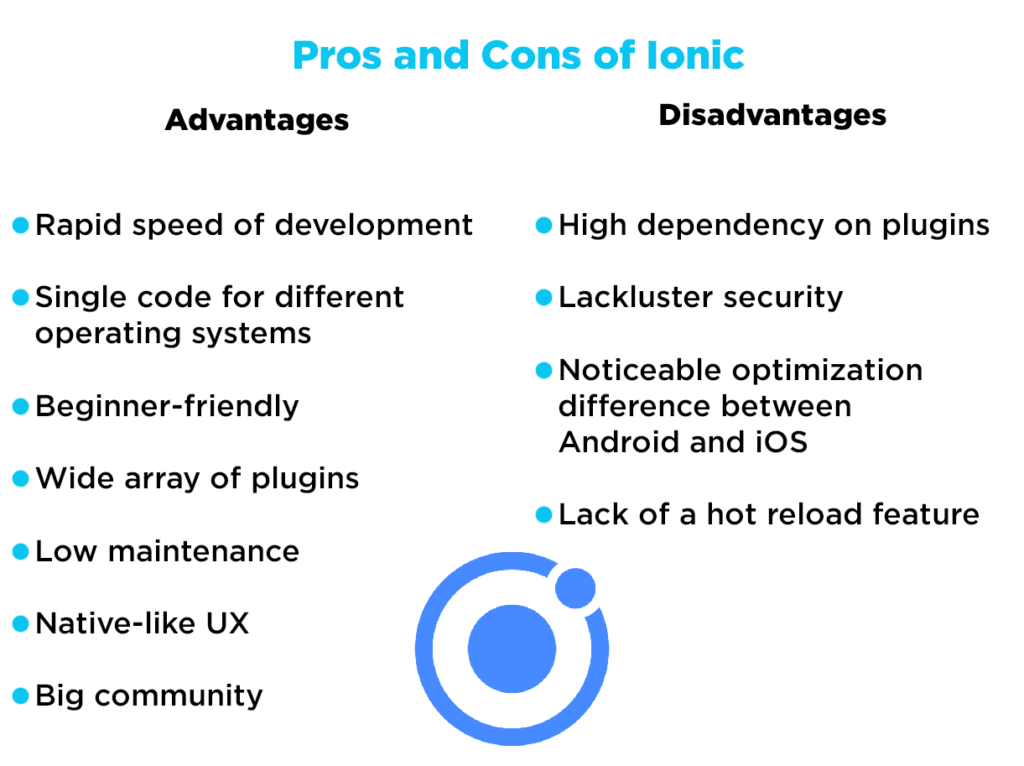 React Native uses Javascript, which is the most common language learned and used by developers worldwide. Ionic uses the most popular web languages such as HTML5, CSS, and JavaScript to develop cross-platform or hybrid apps. Ionic also uses Typescript, a subset language of Javascript. Xamarin, on the other hand, uses C# and .Net languages.

React Native is the most popular among these three because of using the most familiar Javascript language.

React Native app developers, by using the various free libraries, can build world-class mobile apps that can run on both iOS and Android. While Ionic offers a free version, the pro version develops the apps faster with a lot of professional help. Xamarin is also open source and free, but it requires a subscription-based Visual Studio IDE. 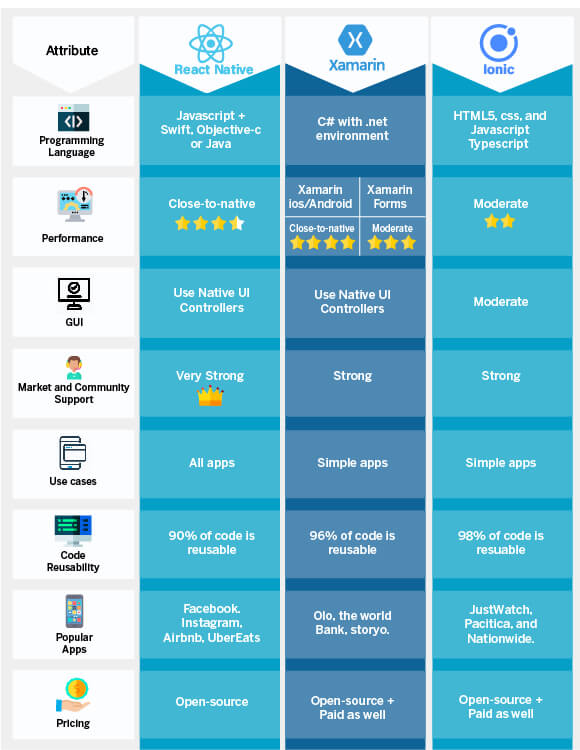 Here we have explained the most important aspects in the comparison among Xamarin, Ionic, and React Native. It must be remembered that your choice of any of these technologies also depends upon your project type and size.

Ionic vs Xamarin vs React Native
Share. Facebook Twitter LinkedIn
Previous ArticleBuild a Successful Marketplace Platform In 2023
Next Article The Who, What, Why, & How of Digital Marketing