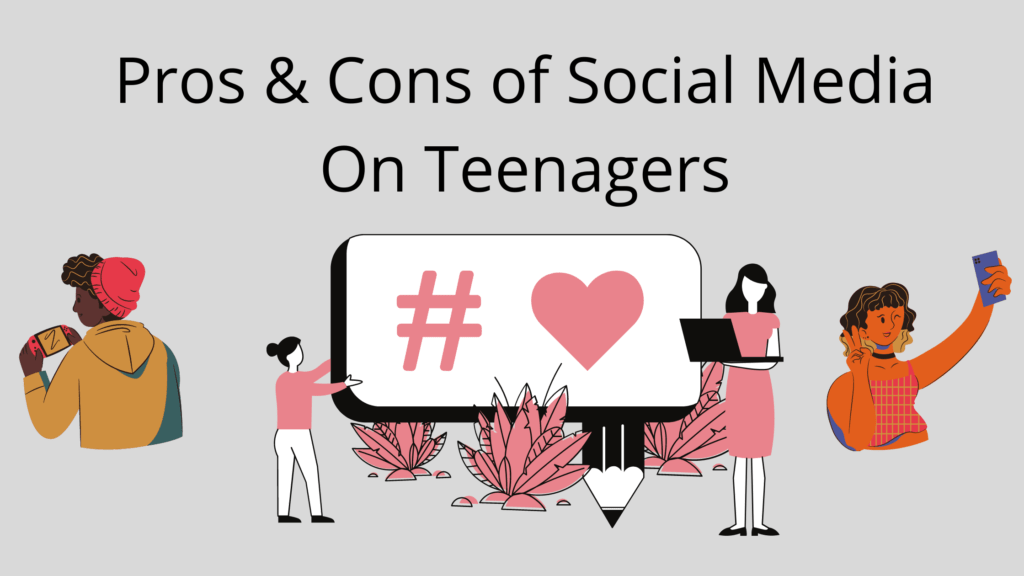 Social media is now the most common aspect over the internet that everyone has access to. From adults to kids, no one can imagine living a life without having a social media account on apps like Facebook, Twitter, Instagram, and more. In this article, we will focus on the fact that teenagers who are growing up and getting to explore more about the world are deeply impacted by the use of social media. Well, it can be in a positive way or even a negative way.

Pros of Social Media for Teenagers

One of the most gracious advantages of social media has been that it has injected teenagers with the capacity to think more deeply. Well, the thoughts could be concerning any aspect such as religion, politics, sports, and so on. Through social media apps such as Instagram, Facebook, Twitter, etc., people come across various posts, comments, and updates that educate them about what and how things are occurring around the world. This allows them to think more effectively and form their own views and opinions. When interacting with other people over a debatable post, the counter replies can allow them to think and answer to those critically.

Learn More: How to Become a Social Media Influencer

It is a true fact that the social media world has influenced people to be more creative. Without access to social media, these teenagers wouldn’t be as creative as they are today. Social media is such a platform that allows teenagers to discuss various events around the world. It can greatly help to bring out their innovative ideas and thoughts revolving around those young minds. Teenagers can even learn about various opportunities, try to excel in those, and portray their skills over these platforms. Instagram allows users to edit and upload pictures in unique ways that enhance the creativity of teenagers.

Teenagers could grab a great sense of money with the assistance of social media. For users, it could be a great resource. Many teenagers over the social media marketing world have learned how to promote their small-scale businesses to earn considerable profits. These platforms will educate and enlighten them about the various aspects of the business world such as sales and advertising. Teenagers who already have some website of their own can acquire more traffic by creating a page on these platforms as well. The emergence of social media influencers to promote brands, offer entertainment, and raise awareness have also been an excellent process they learned to earn money.

Social media platforms had been created with the motive of making connections between people & students. However, this concept has greatly evolved over time. The maximum number of social media users are considered to be teenagers. For introverts who cannot generally interact with others find these social media platforms to be very comfortable for communicating with people. Making new friends, interacting with strangers, communicating with old friends, building a professional network are all part of developing communication with the help of apps like Instagram, Whatsapp, Facebook, etc.

Cons of Social Media on Youth

Social media is the most addicting thing next to drugs. People all over the world, especially teenagers have been the biggest prey to this problem. It is one of the major cons of using social media. In reality, social media offers so much that once you keep sticking at it, you will be stuck for life time. It can prove to be a huge distraction for many. It can have many negative impacts on children. They might often be using their phone even during family gatherings or other events. Teenagers might fall sick due to lack of sleep for remaining engaged on social media till late at night.

It is a very serious issue and a major disadvantage of social media that teenagers are faced with. When teenagers are actively using Facebook or Instagram they can come across such problems. Cyberbullying was, however, even prevalent before the emergence of social media websites. However, currently, these apps have only made it more feasible for teens to bully each other or even creeps to bully these teenagers. This is the reason why many parents around the world restrict their children from using social media for entertainment. Social media can also be used to brainwash teenagers that deeply leaves a negative impact on them and lead them to commit a severe mistake in life.

Learn: Signs to look for if Your Child is Cyber-bullied

Social media platforms such as Facebook or Instagram are mostly used to upload pictures. Teenagers are often fascinated by the number of likes and comments that they receive on their photos. However, social media is regarded as superficial in these aspects. These teens keep thinking that their entire world revolves around his or her followers who are liking and appreciating their pictures. Hence, they become more conscious of their appearance and always want to maintain a high social status which eventually leads to disturbance of mental peace.

Must Learn: How to Use Social Media without Harming Your Mental Health

There you have all the information that you needed to know about the positive and negative impacts of the social media world. Adults have a complete understanding of how the world really is. But teenagers are still not well acquired with how life works. Social media is just a virtual entity that is offered to us as a source of entertainment and relaxation. Hence, these kids might be hugely impacted by its effects. Thus, parents must act as a guardian here and make their children understand what is good and what is bad.

Read: Impact of Internet On Society: A Global Perspective