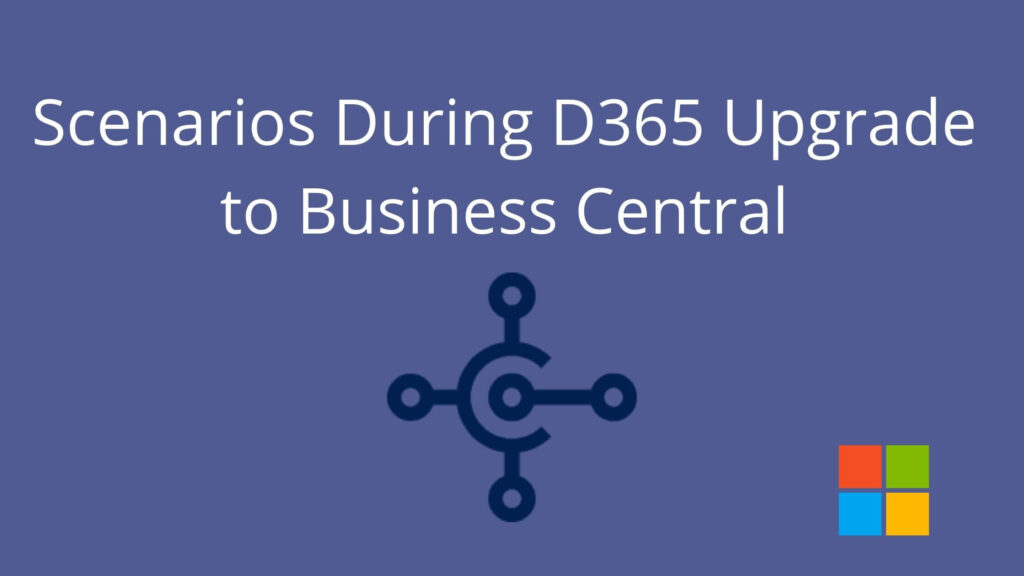 The entire process of D365 Upgrade to Business Central can be quite a complicated one if not handled properly. The upgrade process is dependent on various factors such as the experience of the implementation partner, whether you wish to have BC deployed on-premises or on cloud, how old your version of NAV is and how many times you got your solution customized and upgraded.

Ultimately, a D365 Upgrade to Business Central comes down to whether you want to upgrade to an online version or on-premises. Depending on this, various scenarios arise which need to be dealt with in order to make the upgrade a successful one. Depending on which version you upgrade from, you may have to convert or migrate the existing help for your solution.

What happens when you do a D365 Upgrade to Business Central Online?

The path to upgrading to BC Online depends a lot of the current solution you use. The nature of online services these days is such that in most cases, the matter is more about migration than it is about upgradation. At the core of the issue, the main task in hand is to import existing data to an empty company in a Business Central online tenant.

If you happen to upgrade from NAV to BC Online, then it is fully supported provided you consider a few things. End users can upgrade to Business Central online from supported versions of Dynamics NAV on-premises provided their application customization is handled by extensions. Data from tables with code customizations cannot be carried forward from Dynamics NAV. The process has been divided into 2 parts:

While upgrading to BC Online, you will be prompted to Set up a company based on questionnaires. In such a case, you will have to Use RapidStart Services.

RapidStart Services is a tool designed to shorten deployment times to improve quality of implementation, introduce a repeatable approach to implementations and enhance productivity by automating and simplifying recurring tasks.

The tool helps gain an overview of the setup process of your new company by providing a worksheet in which one can set up tables often involved while configuring new companies. In the process, one ends up creating a questionnaire to guide customers through the collection of setup information. Most importantly, RapidStart Services prepares you with default setup data that can be fine-tuned and customized.

During the upgradation process, if the system prompts you to import data from any other Finance system, then you must use Excel or Configuration packages to import data. At the time of signing up for Business Central, end users are given the option to create an empty company to upload their own data and to test it as well. Depending on the finance solution they work on, end users can transfer information about customers, vendors, inventory and bank accounts. Additionally, master data and transactional data from other finance systems can also be imported based on default configuration package in Business Central.

During the upgradation, if the system prompts to import data from Dynamics GP, then the Data Migration Wizard must be used to import master data.

At the time of upgradation, if the system prompts you to import data from Intuit QuickBooks, then you must use the data migration wizard to import master data. This extension makes it very easy to migrate customers, vendors, items and accounts from QuickBooks to Business Central.

You can export relevant information and then open an assisted setup guide to upload the Data to Business Central.

Information such as customers, vendors, items, chart of accounts, beginning balance transactions in General Ledger, on-hand quantities for inventory items and open documents for customers and vendors such as invoices, credit memos and payments can be imported from QuickBooks Online to Business Central.

What happens when you do a D365 Upgrade to Business Central On-Premises?

The first task is to install the prerequisites and tools. The next task is to prepare the application object text files.

The following tasks include merging versions, handling conflicts importing and compiling merged objects in empty databases, connecting the new business central server instance to the database, compiling all the newly imported objects and then choosing to synchronize later, checking and changing the application family and version, configuring pages and reports to be searchable, building object search index, transitioning the custom code from old codeunit1 to use the new implementation, exporting all objects, importing the upgrade toolkit objects and eventually publishing extensions.

Once the application code is upgraded, next comes upgrading the data. Data upgradation entails the use of data conversion tools to convert old data with the old version’s table and field structure so that it functions together with the new version’s table and field structure. Table objects and table data are majorly modified during data upgradation whereas objects such as pages, reports, code units and XML ports are upgraded as part of the application code upgrade process.

Once all necessary pre-requisites are taken care of, end users must prepare for a multi-level data upgradation process that involves Following