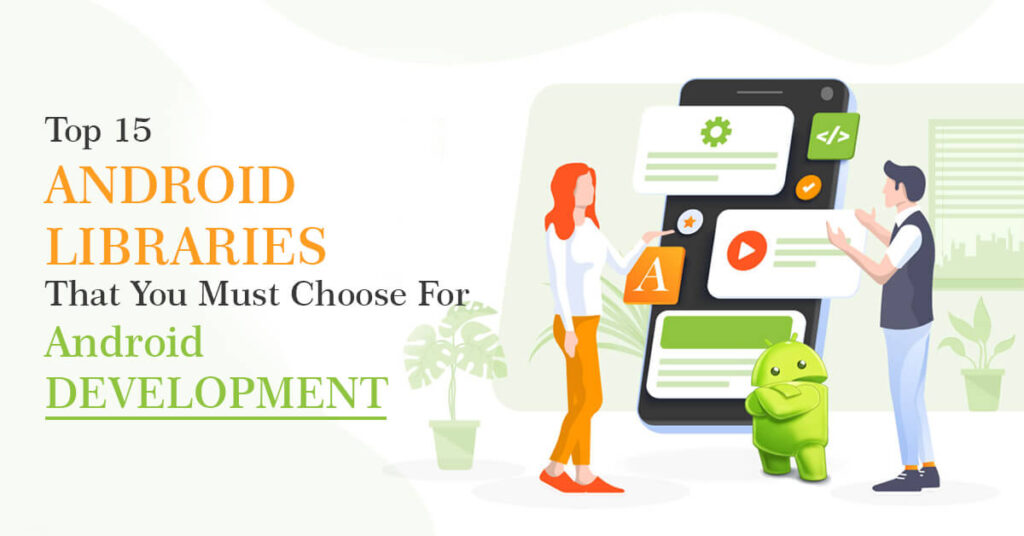 Android is basically a mobile operating system built by none other than Google. It is a modified form of Linux kernel and other open-source software that has been developed to cater to touchscreen mobile devices including tablets and smartphones. Talking about Android libraries, they are basically created by an entire community of Android developers with a well-illustrated interface.

Android libraries can be explained as a comprehensive set of behavioral implementations written in a specific programming language. These libraries play a vital role in rendering necessary, pre-written codes to developers for seamless and scalable development of mobile apps. There is absolutely no need for reinventing the wheel while mobile app development is in progress.

Android libraries constitute a variety of things including message templates, configuration data, documentation, help data, values, pre-written code and subroutines, classes, and so much more. They are basically a tool for phenomenal Android app development.

Android app development calls for full dedication and commitment. It requires a particular set of libraries and only a few tools. Hire dedicated mobile app developers to get apps developed and make things work in your favor. Android libraries and tools not only save a great deal of time but also make the Android apps bug-free. A majority of people opt for Android app development for the mere reason that the codes are pre-written and less time is involved.

Let us now discuss the most sought-after Android libraries that you can use in 2022.

Gravity View is one of the trending android libraries that I have come across this year. It is basically a new concept that has emerged in Android libraries. It is generally used to tilt images with the help of sensors. This is the kind of Android library that employs the motion sensors present in the Android devices and enables every Android mobile user to carry out specific functions by rotating their respective mobile devices. The image tilting is what Gravity View allows the users to perform using sensors.

MP Android Chart is another type of Android library that makes use of graphical designs and drawings. This library is well supported with pie, bar, line, radar, and bubble. It is widely used for dragging, animations as well as scaling purposes.

ExoPlayer is a typical Android media player library and is basically powered by Google. It is one of the most useful Android libraries you will come across in the field of mobile application development. ExoPlayer enables the playing of audio and videos with a variety of customizable features and capabilities.

The Android libraries list is incomplete without Timber. Timber is a popular Android library that proves to be a true helping hand in learning and debugging faster. Timber has, without a doubt, great potential when it comes to making logs as well as tagging the logs. Timber makes it easier for developers to do it manually. The logs do know what their classes are, and as far as tags are concerned, they come automatically, making things all the more simple and smooth.

Crashlytics is an important Android library that can be used at the time of app crashes. Crashlytics enables users to report any app crashes in detail and, in addition, get to know the issues pertaining to the crashes that took place. Knowing the reason for the crash helps in fixing the problem first-hand, that too on the basis of priority. This Android library can be implemented very easily and quickly without having to wait. It doesn’t make the app slow and is indeed a necessity if you don’t want your apps to crash in between.

Robolectric is one of the most talked-about Android libraries of 2021. This Android library is meant to provide quick and valid unit tests that can be relied upon. Robolectric is capable of managing the inflation of resource loading, handling views, among a gamut of other things. Not only this, but Robolectric can also singlehandedly stimulate Android SDK without the need for any other framework.

CAMView is basically a barcode scanner that facilitates accessing the camera easily with a QR scanner. This Android library is preferred over the Zxing library as it offers a plethora of unique features such as live processing via camera, barcode scanning, live video/preview, and so much more.

Bubble Navigation is a fascinating Android library that is not only lightweight but also offers a variety of options to choose from. Developers get a plethora of custom options to build fresh and unique navigation bars. This Android library is surely a distinctive approach to navigation and is commonly used by a majority of Android developers.

Espresso is one of the best Android UI libraries. It is a testing library that helps developers with user interface tests for Android mobile apps. It helps you in identifying whether Text View’s text matches with other text. Espresso can be used for writing reliable, beautiful, and concise test cases for your Android UI.

Picasso, as the name indicates, is a well-known Android library functioning as an image loader. It helps in not only loading but also caching the images. It is widely used in apps such as shopping apps, image editing apps, social apps, etc. that are either related to or deal with photos.

The Retrofit Android library comes in handy when it comes to mapping APIs into a client’s interface as a type-safe REST client, that too in a smart way. This is done with the use of annotations. A network request can be made quite easily with Retrofit.

Florent Champigny-based ExpansionPanel is another amazing Android library that offers a gamut of features. This library enables developers to implement Expansion Panels without any hassles and also ensures lightweight editing of elements. With a variety of libraries existing in the market, ExpansionPanel offers unique capabilities such as allowing you to set up different expansion layouts that can be opened one at a time. This Android library can be easily understood and developers will be able to do things quite effortlessly with a sample application at their disposal. The entire coding is done under the Apache-2.0 license. Infact, the sample app can be easily found on Google Play for the developers to check.

MyLittleCanvas is one of the top Android libraries for developers. This Android library makes use of various objects instead of methods. Moreover, you can use it to implement RectShape, RoundRectShape, TextShape, LineShape, DrawableShape, PathShape, CircleShape with Canvas methods.

Another incredible Android library that you may come across and want to leverage is Kotlin-math. There are a number of types provided by Kotlin-math that you might be interested in. All of these types are value types only. This library makes it easier to write graphics math by offering an entire set of APIs. These Kotlin APIs are built to easily port codes to and from the shaders and are majorly modeled after OpenGL Shading Language (GLSL).

ButterKnife is the favorite library as far as developers are concerned. Developers get to save a lot of time by not writing lengthy codes and repeating them every now and then. This library is really a boon for developers who intend to avoid writing the same codes again and again. ButterKnife also helps in clicking events, binding the strings, drawables, and more. An Android project can be easily accomplished with such a stunning Android library.

So, how should you pick the right Android library? For this, you must first know what you are looking for. Whether you are seeking an Android library for the purpose of networking, unit testing, or intend to use an image library, choose accordingly.

This comprehensive list will help you select the best one and go ahead with it based on your distinct requirements. Further, you can look for various core features offered, reliability of the author, and license, among other crucial things to make the right choice.

If you are still not able to decide, why not hire an Android app developer and let him/her make things easier for you? You can outsource to an Android app development service provider to leverage the above-mentioned Android libraries and get stunning Android mobile apps developed as per distinct needs.