What’s the Difference Between a Cable Modem and Router? 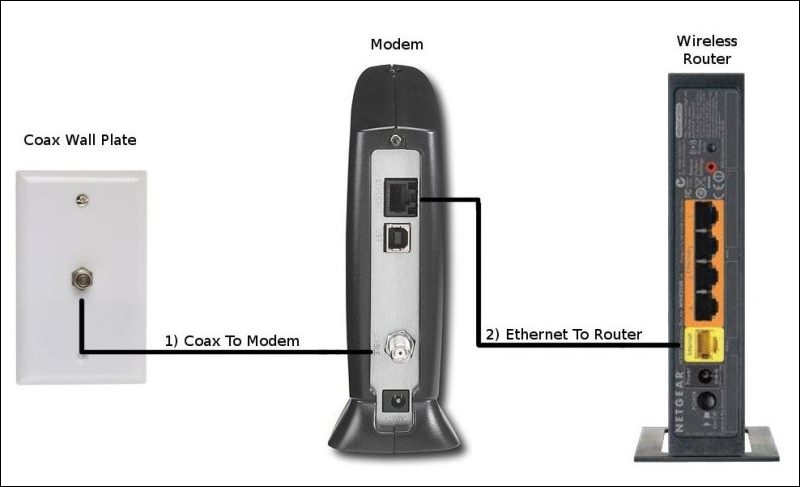 First of all, what are peripheral devices?

A peripheral device is an auxiliary device used to give information into computer and get information out of the computer devices.

This is what a peripheral device does – it links with a computer system in order to enhance functionality. Some examples of these devices are a keyboard, a mouse, a monitor, a scanner and a printer. The definition of computer peripherals is that they are devices which connect to a PC but they are not a part of the basic architecture of the computer. Thus, the core of basic computer elements are the following: the power supply, the central processing unit, the motherboard and last, the case of the computer which contains the 3 components. So everything else is a peripheral device. Some consider this to be a rather constricted view, as a variety of other elements are necessary for a PC to function (for example, a hard drive and RAM or random-access memory).

Thus, many use the expression peripheral to refer to a piece of equipment which is found externally from the computer case. In effect, the device is linked to the PC in order to expand the system’s functionality. Also, another view of peripheral devices is the fact that they depend on the PC system. There are a variety of peripheral devices, and they can be classified into 3 main categories: 1. A mouse or a keyboard, which are called input devices; 2. A printer or a monitor – output devices, and 3. A flash or a hard drive, which are storage devices.

Also, these devices can be external and internal (also called integrated peripherals). Usually, when they refer to peripherals, most people mean the external ones.

But let’s be quite clear – the expression ‘peripheral’ in no way means that these devices are not vital for a functioning of a PC. And what about routers and modems?

The two of the most common or most used peripherals are routers and modems. Many still are unsure what the function is of the two, because, though they might look alike, they have different purposes. It is quite fortunate that the functions of these 2 devices are not very hard to comprehend.

So what is a router?

Wikipedia says: “A router is a networking device that forwards data packets between computer networks. Routers perform the traffic directing functions on the Internet. Data sent through the internet, such as a web page or email, is in the form of data packets. A packet is typically forwarded from one router to another router through the networks that constitute an internetwork (e.g. the Internet) until it reaches its destination node.The most familiar type of routers are home and small office routers that simply forward IP packets between the home computers and the Internet. “

A router is defined as a little box that permits several computers to link to the same network. The earlier routers had a number of Ethernet ports for wired links, but most contemporary routers also offer the possibility of wireless connectivity. These are called “wireless routers” and they frequently have 1 or 2 mobile antennas on both sides, although some place the antennas within enclosed space. Moreover, wireless routers permit a number of PCs and devices, like for example tablets and smartphones to connect to the same network. Even though you may be connected to a router which can offer access to a LAN (or local network), this does not automatically give access to the Internet. Thus, for a device which is on the network to be linked to the Internet, according to this site 192168ll.net it is necessary for the router to be linked to a device called a modem. Consequently, the majority of routers have an Ethernet port which has been designed to link to a cable or a DSL modem.

Router used as a Interfaces for physical player connections such as copper cables, fiber optic, or wireless transmission. It also used for subnet and more other.

And what is a modem?

Wikipedia says: “A modem (portmanteau of modulator-demodulator) is a hardware device that converts data into a format suitable for a transmission medium so that it can be transmitted from computer to computer (historically over telephone wires).Modems can be used with almost any means of transmitting analog signals from light-emitting diodes to radio.A common type of modem is one that turns the digital data of a computer into modulated electrical signal for transmission over telephone lines and demodulated by another modem at the receiver side to recover the digital data.” In short, a modem can be described as a device which offers access to the Internet. This device links to the Internet service provider (or the ISP) which usually is the provider of DSL Internet or cable service. In fact, cable modems contain a coax (short for coaxial) connection, and this is the identical kind of connector which is found on a cable box or on a TV. This in turn links to a cable port which is located on a wall. Also, DSL modems have phone connectors (they are also named RJ-11 jacks) which can be linked to a phone socket which is located on a wall.

So, by linking a modem to a router (and not directly to a PC), all the existing devices which are linked with the router can use the modem – and as a result, the Internet. In fact, the router offers each linked device a local IP address, although they all possess an identical external IP address, always assigned by the ISP.

Difference Between a Modem and Router This is the order of connecting:

Also, even though we know that the router and the modem are as a rule separate units, but they can be combined into one single device, called a hybrid device, at times offered by providers in order to make the process of setting up simpler.

Cable Modem difference between a router and a modem Router what is a modem what is a router What's the Difference Between a Cable Modem and Router
Share. Facebook Twitter LinkedIn
Previous Article10 Best GPS Tracking Apps for Android and iPhone
Next Article 10 Best KeepVid Alternatives to Download Online Videos