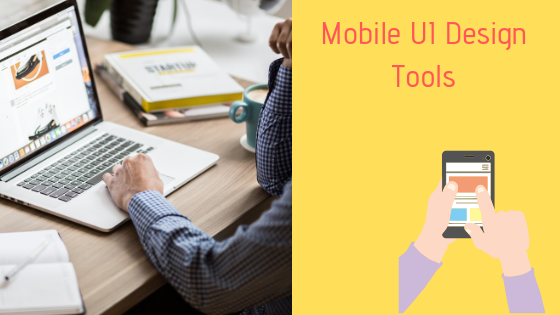 The first part of an application that users see in the app store is the design of the app. Their decision to download the app will be primarily based on the description and the screen views, so it’s incredibly important to have the best app design possible. Read on for our list of the top 20 best design tools for creating a fantastic mobile app UI.

Sketch is a MacOS-based super graphic design tool which is similar to Photoshop but with a focus on UI design. It’s good to use because of its simple operation and features which allow symbol design like buttons, tabs, and more. It has infinite zooming, 2x export, and styled vector shapes that are perfect for many different resolutions. It’s also easy to hand off to visual designers since the same tool can be used for both. Many changes that have occurred in-app design are thanks to the vector model employed by Sketch.

XD is Sketch’s main competitor and for good reason. If you wanted to use Sketch but prefer working from a PC instead of a Mac, this tool is the one for you. XD has almost all the same features as Sketch, including wireframing, prototyping, and more, and it’s also incredibly fast and simple to use. The only drawback with Adobe XD is that it’s still in preview state so it lacks some features, but it has a promising future and is on track to surpass Sketch in the near future. InVision is one of the top mobile app design tools in terms of power and options. Designers can rapidly transform their ideas into powerful designs with vector-based drawing as well as flexibility in layers. InVision also easily lets you animate transitions and include interactions so you can have a working prototype. You can also share your files with the rest of the team and discuss them in comments within the app so it makes the collaboration aspect effortless.

Mockplus is not only powerful but it’s cleaner than many other tools out there that have been around longer. It’s code-free and easy-to-follow so you can create with just a drag-and-drop option. There are many different preview options which allow you to test out your prototype, and its team collaboration futures are a great new feature from a recent update. Developers also really enjoy the ease and efficiency of sharing and exporting prototypes without having to rely on remote publishing. This web tool has a simple interface and many built-in features for intensive wireframing and prototyping. This tool is efficient in the design, testing, and roll-out stages and other features like real-time joint editing, previews and commenting make this a highly popular app. Everything can be edited within the tool, including brightness and sharpness of images, and it can be exported in various formats. UXPin can be used on all three main platforms for design – iOS, Android, and web design.

Marvel is a mobile app design platform that’s truly all-in-one; it can be used by developers and non-developers alike because of its simple and intuitive system. The best time to use this app is in the early stages of design when you need to present a concept to your team as something visual and tangible. With Marvel, you can turn an idea into a wireframe in just minutes from either a desktop or a phone or tablet.

The big draw with Proto.io is that its prototypes are very engaging and have the same look and feel to the actual app you’re building. With this tool, you can test your ideas on many different devices. Although Proto.io was originally designed for mobile apps, it’s now being used in many other internet-connected devices like alarm clocks, cars, smart TVs, and more. It’s very functional and designers can make quick screen transitions, orientation changes and touch gestures in this tool.

Zeplin is actually only compatible with Sketch and is a plugin and web app. It lists attributes of elements into a specifications sheet which is helpful for communicating between design and develop teams. Zeplin is a good tool to use because designers can hand specs to developers at any stage of the process, not only at the end of the design. This means iterations can be completed throughout the process and makes the overall design time much shorter.

Azure is a wireframing platform which requires no coding knowledge, and like many other tools on this list has all the features needed to choose your design and document the process. There are two editions, Standard or Pro, which are both excellent except that Pro has additional collaboration and documentation. It is the biggest application so far for advanced prototyping, and despite this it functions at an incredible speed.

Avocode isn’t actually a UI design tool as you cannot in fact make a prototype or design. Avocode is instead extremely useful for working with existing designs. You can work through a design from the prototype phase to the code phase by sharing designs, discuss components, select design areas, and tag colleagues.

3ds Max is a great tool which is mostly used for rendering, animation, as well as 3D modeling. It was originally developed for game design visualization but can be used for other design types as well. There’s a large and useful library of 3D content that developers can use for projects, and pre-written scripts that can increase productivity and speed of work. The main drawback is the cost of 3ds Max, and its limited compatibility.

Mockups has a free trial which lets you test out its functionality before buying it. It’s efficient but simple, with a drag-and-drop model and compatibility with Microsoft Windows, Android, and MacOS. It has many useful icons and even a Sketch plugin. Designers can use this tool for mockups of mobile, web, and desktop applications. Framer is one of the most advanced design tools out there, but it is surprisingly easy to use despite this. You can drag and drop functioning components from the Framer X Store without any coding knowledge required. Framer X has automated grouping, flexible layouts, and adaptable stacks so you can rearrange any elements without having to keep an eye on your alignment or responsiveness.

Justinmind is another tool that doesn’t require you to use any coding whatsoever. Marcus Stein, a UI/UX designer at 1Day2Write and Next Coursework, explains that “with this tool, you can design wireframes and prototypes for any platform from the concept stage to a highly interactive prototype. You can also use database simulation with real data, conditional linking, tab controls, and many other helpful interactions to test our your product.” Fluid UI’s prototypes are visually beautiful and can be completed virtually in minutes. All it takes are some simple swipes, clicks, and taps to use their simple prototype building system. There are also more than 2000 built-in components from various libraries which speed up the prototype integration and opens the door for quicker feedback and review.

This design tool was developed by Facebook engineers for all Facebook apps and is now free for anyone to use. Although it has great functionalities, it is one of the more complex tools on this list. You can preview your app prototype here but as it is a standalone interface, you would have to copy-paste layers from Sketch or another tool into Origami to preview. One great functionality with Origami is that you can connect the tool to iOS or Android devices to preview it and see your changes live as you’re building your prototype. According to Laura Hilton, an app developer at WriteMyX and Brit Student, “OmniGraffle is a diagram design tool lets you rapidly visualize the flow of the app so you can plan out the development without any problems. You can prototype screen flows, strategy maps, and many other diagram options.”

Balsamiq is different from other tools in that its sole focus is wireframe design. If you want to design only wireframes, this is the tool for you. You can either make a sketch or a clean design, but in either case, it’s very fast and simple to use and its many UI elements can help you put your idea down. Slicy is a reinvention of Photoshop slicing. You can export any element for your website or application by renaming your layer groups, because Slicy exports layer groups individually, so you can move, overlap, or hide any of the design elements. This saves you lots of time and is quite easy to do as well.

HotGloo, a robust UX wireframing and prototyping tool, lets you work on any kind of mobile application which require certain user interfaces. There are many interactive features and many app designers can collaborate on one project at the same time. You can also work on your project at any time without any interference from a browser or operating system.