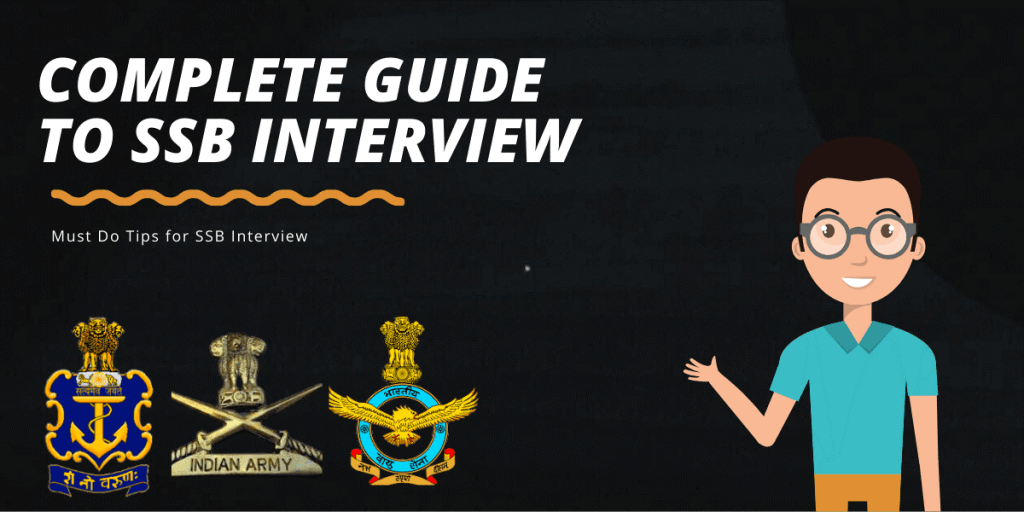 This detailed guide on SSB help candidate to prepare for SSB interview productively. The main reason for the freshers who do not qualify for this for the exam first time is the lack of information about this exam. There are many myths related to this SSB Interview. We will be covering all parts of this interview that will help the student to prepare for the SSB interview. Freshes who first time attend this interview get foxed and do not get the idea of what type of test they are going with. There is also a reason that you have faced this test the first time in their life.

Most of the candidates who qualify SSB interview are from Sainik School and Rashtriya military school. Does it mean a civilian cannot qualify for this interview? No. Nothing like that. Any candidate who wishes to join Indian armed forces, fulfill the eligibility criteria, and get recommended by the interviewing officers can qualify this exam.

There are many ways to enter into SSB interview eg NDA exam 1 & 2, CDS, AFCAT, TES, TGC, SSC Tech, etc. A large number of candidates apply for this exam through NDA and CDS. During this process, you have to first qualify the written exam and then you have to appear in this interview.

There are two stages of this interview

In stage one exam there are two tests conducted the first is the OIR test (Officer Intelligence Rating Test) and the other one is picture perception and description test.

This is the first MCQ test in the SSB interview. Candidates are made to sit in a big hall in which they are given a question booklet containing 40 questions. There are two tests conducted back to back. There is no gap between the tests each test goes for 17 to 20 minutes.

Picture Perception and Descriptive Test is conducted to test the presentation skill, communication skills, and leadership qualities of a candidate. PPDT is an important part of the screening test so the candidate needs to get selected for the next 4 days. You will be shown a picture for 30 seconds and then given one minute to note down some important details like the character of the image, age, and gender. Every candidate then allowed to write a story based on the picture for 4 minutes.

This is followed by story writing candidates are made to sit in a semicircular fashion and discuss the story among them. Accessors in SSB test your teamwork capability and the group is allowed to reach an overall conclusion.

How to write a positive Story for PPDT Test

Write the details of the image with indication marks in a rectangular box on the top of the paper.

If you observe the image you will note down where the motion of the ideas takes you. Let us consider if you see the scene of the farmland you can create a story related to the farmer. Make one character as your hero who will lead the story and the character coming out of the hero is no one but you.

If the story goes through a series of in the action part you have to take this story to a happy ending. Your hero has to solve that problem to finally take the story to a positive side. If you do not see any type of problem in the picture you do not have to misinterpret the story. The story must contain an idea.

Approximately one hour after the PPDT test your result will be shown. The candidate who qualified for the screening test is given a new chest number. Students who do not qualify are sent back home on the same day.

All the qualified candidates have to stay at SSB for the next 4 days. They are allowed to go through all various types of test that is to be checked within these four days. The real competition then comes into the picture.

Psychological tests start from the second day of the SSB interview. This test has to be done within the time constant so that candidate cannot hide his feelings and by doing so psychologists get the idea about the true feelings of the candidate. The main aim of this exam is to test the personality and behaviour of the candidate and during this process, they also get officers like quality in.

Candidates have to go through the four below- Psychology tests.

Students also are shown a slide of 12 pictures but the twelfth picture is the blank one. Every picture is shown for 30 seconds and allowed a time of 4 minutes for writing one story for each picture. In the last slide, you have to write any story of your own choice.

In the Word Association Test, candidates are given 60 words and 50 seconds for writing each one line for each word. WAT is a very important part of Psychology tests because the time allowed for this test is very less so whatever first thought comes into the candidate mind can be written. You can improve your approach for this test with practice.

Candidates are given a booklet of 60 questions with 60 situations. OIR rating of the candidates and their problem-solving ability is tested through this test.

Candidates are asked to write five different paragraphs about their own life. The question is something like

1. What do your parents think about yourself?
2. What does your friend and colleagues things about yourself?
3. What kind of academic relationship do you have?
4. What is your self-image in your own eyes?
5. What type of person do you want to be in your life?

All opportunities coming to them, they have to show their qualities. They do not have to make any false claims that can take them in their trap.

This test is mostly based on outdoor activity. GTO start testing candidate in the group and then gradually move to test singly.

Tests conducted as a part of GTO are as follows:

The topics of group discussion are generally taken from current affairs, geographical and political scenario of the country and International relationship.

This GTO test is also called military planning exercise. Candidates have to cross some obstacles in the group having some constant. They are given a map and a stick. One of them in the group finally tells the group plans to the GTO.

Candidates cross some obstacles with the help of helping material like a wood plank, bully, and rope.

It is the same as the progressive group task but the group is divided into half.

10 tasks need to be completed individually by every candidate.

This is also an individual task but candidates are allowed to take two to three subordinate of their choice.

The difficulty of this task something like PGT level 2. This is the final and looks of the candidate during the task in a group.

Depending upon the batch size personal interview is conducted on the 3rd or 4th day of the SSB interview. As your GTO task is over you may soon be called for the interview. You may be asked to come to the sports dress if you do not get time to change the dress. But if you get time to wear a formal dress. If it is hot summer wear a formal dress with full sleeves shirt and formal pants and a tie. Remember to save your beard and groom properly before going for the interview. Ladies mast tie their hair in a knot and not leave it open.

This is the final test of the candidate. This test goes for 2 to 3 minutes. You will get a chance to meet all the interviewing officer at the same time. The questions will be related to your stay at SSB and you have experience there. On the conference day, accessory get a final look at the candidate.

Defence Services one of the most prestigious and challenging in terms of the job profile. A soldier is a respected citizen of the country. Joining the Indian defense as an officer is a dream for many students. I have tried to bring out the complete inside and the science behind the selection process. It is up to the candidate how they prepare for this exam. If you prepare for the SSB interview strategically you will not take more attempts. Because this is all about showing your officers like quality in the exam.

ssb interview process
Share. Facebook Twitter LinkedIn
Previous ArticleHow to Send and Receive Faxes from Gmail Easy and Free (All in 3 steps)
Next Article How to Encounter Format Error: not a PDF or corrupted?