A Brief History on How Chatbots Came into Existence 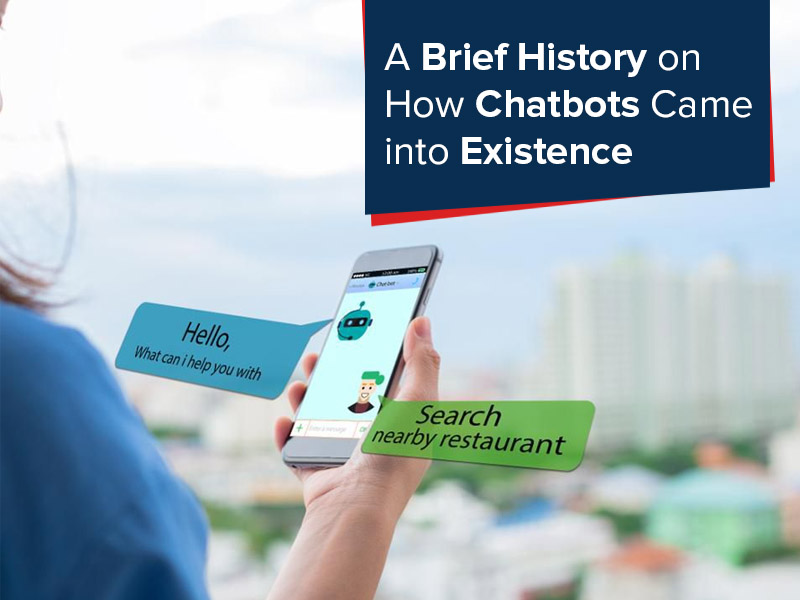 There is no denial in the fact that chatbots have come a long way ever since its evolution. Usually, people think that chatbot is an emerging technology that doesn’t date back that long. However, they have been around since the time of computers and before the average customer had internet access. Introduction of Chatbots has brought us to the era of the conversational interface. Be it Siri, Cortana, Alexa, or any other Chatbots for Social Platforms, they are becoming a part of our lives. The question is where did bots get their start? It’s time to gain some knowledge about chatbots and learn about its history.

Developed by Alan Turing, the Turing Test was used to test whether a computer can think like a human being or not. His idea came from the question “if machines can think?” and he even submitted his theory about the first AI concepts.

It is the first chatbot invented by Joseph Weizenbaum at MIT Laboratory that imitated the language of a therapist. Users knew that they were interacting with a computer program and it could not pass the Turing Test.

Another bot that came after 6 years is Parry created by Kenneth Colby, which was better than the previous one. During the survey, only 48% identified that Parry is not human. Unfortunately, it also couldn’t pass the Turing test.

Next chatbot was Racter and reports say that ‘the policeman’s beard’ book was written by Chatbot Racter. However, it was never released publicly and was considered only as a basic computer program.

After the development of many text-based chatbots, Jabberwacky was the first bot that had a voice. This bot not only thinks like a human but also behaves like one. However, the test couldn’t be passed.

This bot was a psychologist with a voice, which was an AI speech synthesis program designed for MS-DOS systems. No test was passed.

It is an online bot that works as a language processing robot. Although it received recognition for being the most advanced bot, it could not pass the test.

This chatbot was developed for SMS and it provided fun messages and interactive chats to AOL, MSN, and other messengers.

This was developed originally to compete with a TV show ‘JEOPARDY’ where two former champions were defeated. The bot helped in getting an analysis of a large amount of data using Machine Learning or neural languages. After this revolution, everyone started asking questions like How much does chatbot development cost?

Developed by Apple, Siri is an intelligent assistant that answers like a human and is a part of iOS. It helps in finding data from the web and fulfilling web-based service requests by users.

Using Neural language Google Now is built by Google for its mobile app users and helps in performing search-based tasks.

Alexa is a chatbot that comes with Amazon Echo devices and can interact with humans through voice. Cortana is a Microsoft bot that retrieves data from Bing & is also good for Windows troubleshooting.

One thing is clear- chatbots are here to stay and the future looks quite bright for chatbots. The bots people used to talk through messaging apps will become voice apps. Chatbots not only work as assistants for fulfilling tasks but also serve as a primary interface to manage several connected devices. To make the best use of Chatbot, it is important to ensure that every chatbot development company is aware of the latest trends like the integration of bots with wearable devices, IoT, AI, etc. With the successful implementation of AI, chatbots usage will increase drastically especially in the consumer-based services.