Everybody loves to listen to music on their home speakers, but when we talk about smart speakers, we refer to a distinctly different technology. Smart Speakers are digital speakers that run on certain operating systems. What makes them smart is the fact that they can respond to audio commands made by the users via voice recognition.

This voice activation allows the smart speaker to perform a whole host of activities, which is not just limited to playing music but also doing web searches, telling the time, telling the weather, creating alarms, and controlling any other compatible smart devices such as phones, televisions, lights, and electronics. Smart Speakers often also have virtual assistants that use AI technology to have basic communication with their users and understand their demands and commands.

Even though we understand smart speakers as being able to do automated commands, there are still many possibilities of functions that can be achieved by them. These features include:

● Being able to use nearly all your gadgets just without your voice is an altogether different level of convenience. You don’t even need to move an inch to get things done.

● Smart speakers are able to act as smart hubs. The control of several household products such as lights, fans, thermostats, and security systems can all interface with smart speakers to allow for smooth and seamless functioning in tandem. You can use smart speakers to schedule and program your gadgets to perform certain tasks at certain times too.

● Smart speakers serve as a one-stop multimedia hub. From your smart speaker itself, you can listen to any music, and play, pause and rewind any media available digitally across your various devices.

● An underappreciated feature of smart devices is their ability to grow. As these speakers use machine learning AI, the more you interact with them, the better they are able to react to and process your voice commands. More interactions mean more data is fed to the AI to make sense out of. This means that the voice recognition technology only gets better with use.

There are certain doubts that a large sector of society has against smart speakers and AI devices in general. Firstly it is the unfounded fear of technology. So say, what if one day the AI becomes too smart and is unable to listen to us. The manifestation of this in smart speakers is your giving them commands, but the AI performing incorrect tasks which it thinks is right.

This dissonance creates a feeling of lack of control over the technology that many people are afraid of. Addressing this fear, there are many manual overrides that exist, so your home assistant just cannot hijack your house.

Secondly, the AI isn’t designed in a manner that it can make decisions on its own. It still functions on the intake of data and converting it into specific results.

The second kind of distrust is related to cybercrime. Many people are afraid that the voice recognition of the smart speaker can be hijacked and hackers can use their voice samples for crimes. This means holding people’s ransom for leaking out confidential information that might have been picked up by the smart speaker.

Sensitive personal information can also be picked up which can lead to hackers getting access to your social media or bank accounts. To counteract this, smart speaker manufacturers constantly keep updating their software to keep up with cybercrimes. Individuals can also protect themselves by ensuring their home wifi networks have strong encryption with passwords that are not easy to crack.

With that knowledge about smart speakers, we can finally assess the differences between Amazon’s and Google’s smart speaker offerings. 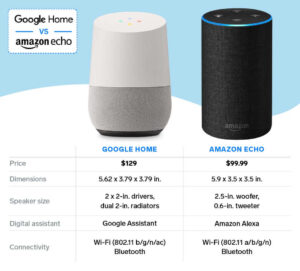 ● For audio quality, there is a wide spectrum of performance as both brands offer multiple products at various price brackets. For the budget range, people simply seeking a better-sounding speaker should opt for the Google Home Mini. The Amazon Echo tends to fall behind a bit unless it is connected to an external speaker via the 3.5mm or Bluetooth.

Even then, Google’s software is calibrated to provide better audio even through external speakers. However, if your budget is higher, you might want to go for the Amazon Echo Plus. Google Home devices in the upper end are too bass-heavy in their audio and lack clarity in the sound. The Amazon Echo Plus and Studio come with Dolby Audio processing and provide an amazing sound. If your only concern is pure audio performance, then the Google Home Max beats everyone in its bass production, with crisp and punchy mids and highs, and the sound doesn’t get distorted at high volumes.

Read: What is Google Home and How Does It Works?

● In terms of software and functionality, both do pretty much what you would expect from them. Whenever you say a command, the AI processes your voice and gives you a result. Both companies provide long-term software support to their products. However, there is a slight difference in their approach. Google’s AI has a much more open-ended structure where it will hear a command and try to make sense of what it is, then perform the task it understands.

On the other hand, Alexa runs on a set of predetermined commands which Amazon calls the Alexa skills. Thus Google is simpler and freer, but Amazon software encourages better third-party implementation and support.

● For those wanting to buy smart speakers online, The Amazon Echo series includes the Echo, Echo Plus, and Echo Studio at $99, $149, and $199, respectively. For the Google offerings, the Google Home Mini starts at $49, the Google Home at $129, and the expensive high-end Google Home Max is priced at $399.

Now that you know all there is to know about smart speakers you can use our comparison between Amazon Echo and Google Home to decide your choice. Individual aspects aside, the main decision lies in which ecosystem serves your needs better!

Q. which is better amazon echo vs google home

Q. which one is better google home mini vs amazon echo dot

Q. which one is better Amazon Echo (2nd gen vs Google Home)

Q. which one is better Amazon Echo Dot (4th generation vs Google Home)

Q. Which is better for iphone echo or google home

Ans. Amazon echo is better than Google home for Iphone.